On 28 December 2009, Mr Louboutin filed an application for registration of a Benelux trade mark with the Benelux Office for Intellectual Property, leading to the registration, on 6 January 2010, under number 0874489, of a trade mark for goods in Class 25 of the Nice Agreement concerning the International Classification of Goods and Services for the Purposes of the Registration of Marks of 15 June 1957, as revised and amended, and corresponding to the following description: ‘Footwear (other than orthopaedic footwear)’ (‘the mark at issue’).

That mark is reproduced below: 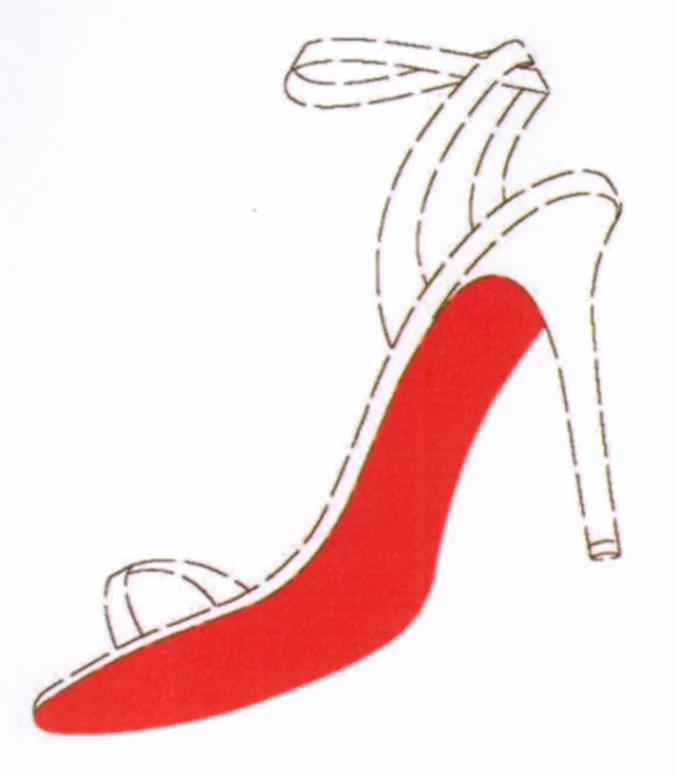 In the application for registration, the mark at issue is described as follows:‘The mark consists of the colour red (Pantone 18‑1663TP) applied to the sole of a shoe as shown (the contour of the shoe is not part of the trademark but is intended to show the positioning of the mark)’.

On 10 April 2013, the registration was amended in such a way as to limit the goods covered to ‘High-heeled shoes (other than orthopaedic shoes)’.

In the course of 2012, Van Haren, which operates shoe retail outlets in the Netherlands, sold high-heeled women’s shoes with red soles.

On 27 May 2013, Christian Louboutin initiated proceedings before the Rechtbank Den Haag (District Court, The Hague, Netherlands), claiming that Van Haren had infringed the mark at issue. On 17 July 2013, that court delivered a default judgment upholding in part the claims of Christian Louboutin.

Van Haren challenged that judgment before the referring court, the Rechtbank Den Haag (District Court, The Hague), claiming that the mark at issue was invalid on the basis of Article 2.1(2) of the Benelux Convention. Van Haren maintains that that mark is a two-dimensional figurative mark that consists of a red coloured surface.

The Rechtbank Den Haag (District Court, The Hague) considers, first, having regard to the graphic representation and the description of the mark at issue, that the colour red is inextricably linked to the shoe sole and therefore that mark cannot be regarded merely as a two-dimensional figurative mark. In the view of the referring court, that assessment is not undermined by the fact that the description of that mark states that ‘the contour of the shoe does not form part of the mark’. The referring court states that, on the contrary, that assessment is confirmed by that specification, in particular since, according to the description, the shape of the shoe, as illustrated in the graphic representation of the mark at issue, is not intended to reduce the sign to a two-dimensional mark, but is intended rather to show the positioning of that mark.

The referring court also considers that, in autumn 2012, ‘a significant proportion of consumers of women’s high-heeled shoes in the Benelux States was able to identify [Christian Louboutin] shoes as goods originating from that producer and was thus able to distinguish them from women’s high-heeled shoes [from] other undertakings’. Therefore, at that time, the mark at issue was perceived as a trade mark in relation to those goods.

Furthermore, in the view of the referring court, the red sole gives substantial value to the shoes marketed by Christian Louboutin since that colour forms part of the appearance of those shoes and plays an important role in a consumer’s decision to purchase them. In that regard, the referring court notes that Christian Louboutin first used red colouring on soles for aesthetic reasons and only later started regarding it as an identifier of origin and using it as a trade mark.

Lastly, the referring court states that, since the mark at issue consists of a colour which is applied to the sole of a shoe and is thus also an element of the product, the question arises as to whether the exception set out in Article 3(1)(e)(iii) of Directive 2008/95 applies to that mark. In that regard, it is unsure whether the concept of ‘shape’, within the meaning of that provision, is limited solely to three-dimensional properties of a product, such as its contours, measurements and volume, or whether that concept also covers properties that are not three-dimensional.

In those circumstances, the Rechtbank Den Haag (District Court, The Hague) decided to stay the proceedings and to refer the following question to the Court of Justice for a preliminary ruling:

Article 3(1)(e)(iii) of Directive 2008/95/EC of the European Parliament and of the Council of 22 October 2008 to approximate the laws of the Member States relating to trade marks must be interpreted as meaning that a sign consisting of a colour applied to the sole of a high-heeled shoe, such as that at issue in the main proceedings, does not consist exclusively of a ‘shape’, within the meaning of that provision.