The General Court of the European Union ruled in Case T‑568/15 which concerns an attempt for registration of a European trademark SSTAR for Classes 9, 18 and 25. An opposition was filed against this mark based on earlier marks ALL STAR and ONE STAR for Classes 18, 25, 35. 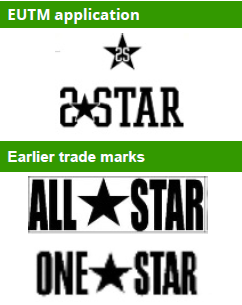 EUIPO upheld the opposition considering the goods of both marks as identical and similar and the signs similar from visual, phonetic and conceptual points of view.

The General Court upheld this decision. According to the court, both marks share a similar construction, a word element with a star between them. Although there are some different words such as ALL and ONE in the earlier trademarks and a graphic element in the letter mark, this cannot overcome the similarity that exists and which can create confusion among the consumer bearing in mind the similar and identical goods for which the marks are applied for.